Words of Art: The Way We Make Art

As artists, I find that the way that we (I) think or perceive things is really important.

For example: It's said that artists see "more" than other occupations because they know where to look and what to look for.

I tend to agree.

Not because I even see half of the stuff yet, but I've been realizing more and more about different things most people don't even notice. For example: clothing textures, colored light reflections, facial construction, eye shape, composition…

I could go on and on.

However, there's another aspect of it that I thought was also really interesting:

If artists tend to perceive more than most other occupations, why are they the one's that HEAR the most criticism?

I read on a blog the other day, that a very awesome and well versed artist said that his mom STILL to this day (he's been in the animation industry for years mind you) asks him:
"When are you going to stop playing and get a real job?"
He said he also gets from his family:
"Is your job even stressful?"
"You just write for children, I have to work with ADULTS all day."

I'm sure you've heard your own versions. I have too, but that's not the point.

The point is, unless you are made of ice, these things definitely sting.

It's said for every 1 insult, someone needs 10 compliments to balance it out. I think that sounds crazy, but feels so accurate! Especially when it comes to the internet.

The freedom to say whatever you want is great, but it definitely invites the "trolls" to come and wreck stuff. Because that's all those people can do, ruin others.


ALL of what I've said, plugs into the same point:
Some people get pleasure from seeing you upset.

Sad, right? Don't they have anything better to do!? Sure they do, but they Don't. And that's why they're coming after you.
Sometimes it's a lack of understanding (with family and friends), and you can try your best to educate them with the amount of Studies, Commitment, Hard Work, Blood, Tears, and such goes into what it is you do.

As I like to refer to it, some people are ACTUALLY like the Joker:
They JUST want to see YOU BURN.

Now you might be saying: Wow COOPER, what a DEPRESSING TOPIC!
Haha, righty you you are! Which is why we aren't done, and I'm switching gears.

First off: You aren't alone in this. And it's not YOU, it's (sadly enough) THEM.
You aren't crazy. You don't stink, and I PERSONALLY love your work. Even if I haven't seen it, I still love it.

I can say that with certainty, because if you are here, you're a passionate person. You have to have some sort of feeling of attempting to better yourself, and you are FIGHTING the good fight!

Therefore, I promise you, your work literally rocks my world. =)

Secondly: There's this magical way that I like to fight with these trolls, or may I call them 'art unbelievers'? (That cool with you? Good.)

Whatever it is, Go watch it. Or listen to it.
You don't even have to watch the whole thing, I find after 10 minutes of my favorite scene I remember why I fell in love with it.

There are some other things that are cool to, like finding some music that speaks to your heart and ignites your passion for it again. That's a great one.

I shared this thought on Facebook the other day, but I think it's worth the restatement:


This was something that I thought was really cool and wanted to share. I found this online and it spoke to me, not sure if it'll mean anything to you guys, but I loved it. At first, you'll probably have the response I did, like, wtf is this? Well it's a comedian's final skit, just hang in there, I think you'll like it.
The idea is, as artists, we have voices that come into our lives that stay with us, things people say that make us (well me at least) feel like I can't do it. Or that I wasn't meant for art. That other people see your path better than you, or that you're art should not be what it is, that it should be…something else. Something it's not, or someone you're not. "We think we know you."
Take something dark, something that hurts, insensitive words that rattle around in our heads, and then turn it into something… well, beautiful.
Maybe I'm crazy. But, maybe you'll like it too. Maybe you're crazy too smile emoticon
******FYI: There is language (i always preface for those people who don't want to hear it), and he is an atheist (if that offends you). But if you can hang tight, it's worth it. I thought it was at least smile emoticon 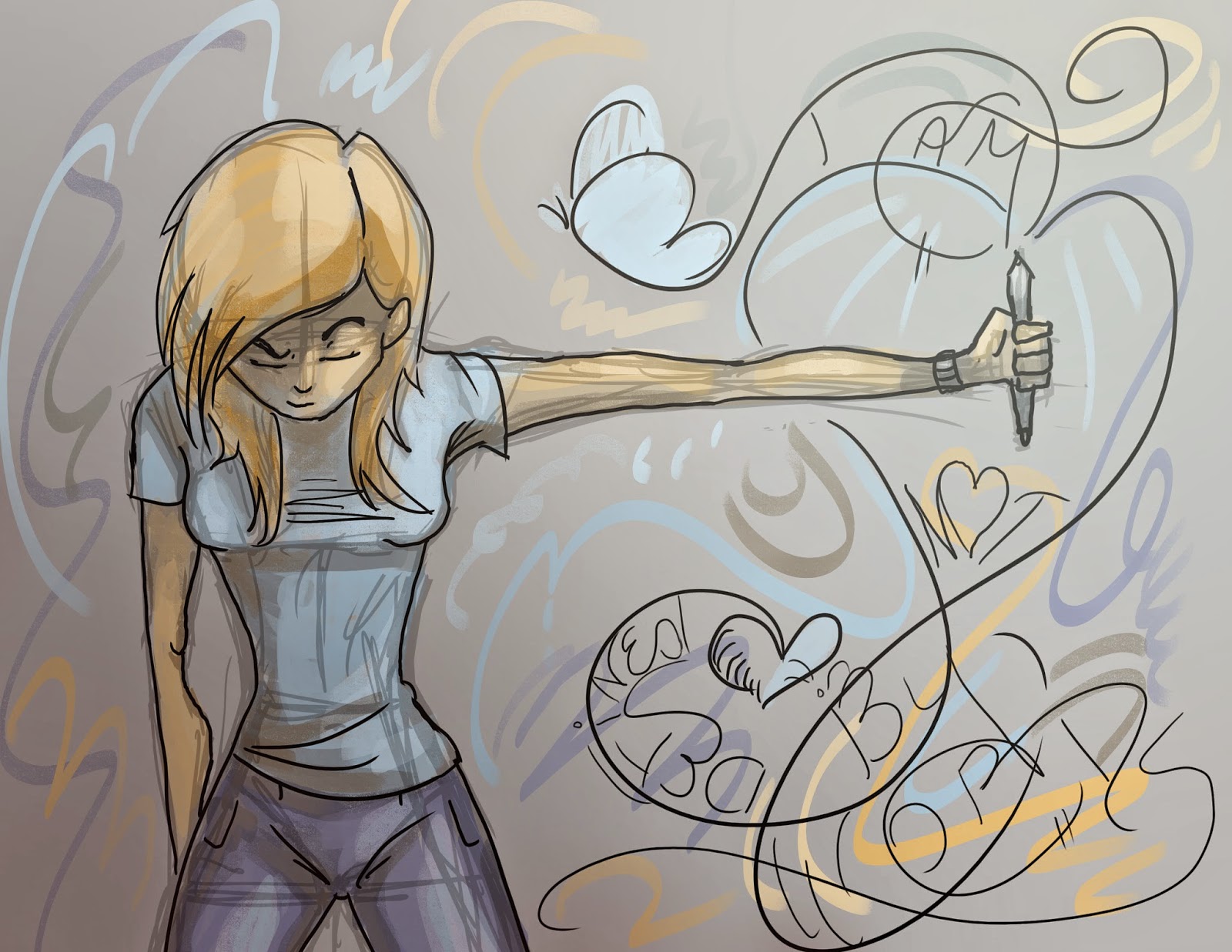 Well here is a piece I did, trying out new brushes, and at the same time, doing something I felt was pretty new for myself. I tried my best to just "Let go" and squiggle a bit.

Because I like it. And I remember why I am an artist. Do you?