Here we are again!
Ill explain my thoughts, but I'll try and keep it brief. ^-^
Let's SNAP TO IT!

THE COLOR ANALYSIS OF TRON:UPRISING 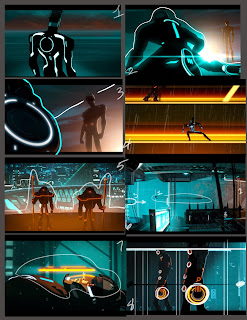 Page 1:
1. The oncoming evil is prominent in the color change on the horizon. No words need said.
2. The color of evil is in the right third of the shot and the up shot really tells us that Beck's in trouble.
3. The placement of Beck's disc right on the camera frames Tron(though we don't know its him yet) in a very tangible way. We can feel the darkness coming, but in the way of the red light. Interesting parallel.
4. The yellow parallels show how much Beck is NOT supposed to be present. I quite enjoy the fact that they put the guard in the top third, only showing his feet. We know what's going on by sheer placement, acting and color.
5. This is probably one of my favorite shots. Watching Beck escape through the center of the screen on the bright blue and white light cycle. The red foreground breaks the blue background up nicely and also shows how Beck is fighting for the grid, and these people are the invaders.
6. The before, during and after shot. Beck and his shadow live in the middle of the shot, the desolated bikes of his previous per suers on the far right side (2) and the oncoming shadow at the far left (3) is what awaits his future.
7. This shot is SO COOL! Beck's face lights up ONLY when the disc passes his face, giving us an interesting look into his thoughts, meanwhile letting us grasp the danger at hand.
8. The dark and light in this shot are really cool. They walk FROM the light TO the dark side of the shot. It's done in slow motion in the episode, I encourage you to watch it. I also love how the red circles completely contrast the straight line work of the background. and the discs at the bottom of the screen keep our eyes attention well. 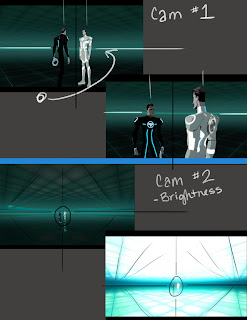 I just fell in love with these shots and I'll explain why.
1. The pans in Tron:Uprising are all very similar. They start wide, circle around the interacting characters and zoom at the same time. Giving us a real feel of the conversation at hand. They never break the 180 rule.
2. Even with the world around Tron and Beck comes to life and blinds us, we never loose site of what we are supposed to look at: them. Why is that? Because of their placement and the line work in the shot. They also keep the biggest black/white difference in the shot, which is inherently where our eye will go, to the biggest differences in values.

PS, maybe now you know a little bit of why I love Tron so much!
Posted by JECooper